We started to fill the water tank: In this view from the top, the cryostat with the actual detector is visible on the left. Photomultiplier tubes of the water Cherenkov muon veto are seen at the bottom and side of the water tank, to the right of the image.

The water acts as a passive shielding against external radioactivity. In addition, using the photomultipliers that can be seen towards the right of the picture, the water acts as an active muon detector. Muons may induce events in the xenon detector that may mimic dark matter signals. We therefore turn a blind eye (“veto”) for a short time whenever a muon travels through the water tank.

The cryostat of the XENON1T experiment is surrounded by an huge and fascinating detector: the Muon Veto. In order to understand what it is, let us remember why we are building an experiment underground. Over our heads, a lot of particles are constantly produced by primary cosmic rays. Secondary particles can provide contamination for low background experiments, such as XENON1T. For this reason, one has to build such experiments in a place where most of these particles cannot penetrate. Only high-energy particles, like muons, and weakly interacting particles, like dark matter, can cross many kilometres of rock. Even though muons can be distinguished from dark matter due to their electric charge, they can also produce neutrons, which mimic dark matter signals. It is therefore very important to properly identify muons and reject their associated signals. This is the main task of the Muon Veto system.

The Muon Veto exploits the peculiarity of very fast muons to induce photons (sometimes thousands of them!) when crossing a layer of water. It is composed by a big cylindrical water tank, about 10m high and 9.6m diameter. Roughly 4m of water, surrounding the inner detector, provide an additional passive shield from the environmental radioactivity, reaching a factor 100 of background suppression. The water tank is equipped with 84 water proof Photo-Multiplier-Tubes (PMTs), which behave like super-sensitive single-pixel cameras. Before mounting the PMTs, we have subjected them to high pressure and water tests, in order to simulate the water tank conditions. Moreover, we have measured their most important properties and classified in different setups. The inner part of the water tank is covered by a reflective foil, which with 99% reflectivity looks like a perfect mirror. Its purpose is to keep the photons inside the tank until they reach the PMTs. A quick estimate can give us an idea about the importance of the foil: in absence of the reflective foil, a single photon would be collected only in 0.001% of the cases.

Last September 2013, the Muon Veto group, constituted by Bologna, LNGS-Torino and Mainz colleagues, had put the first stone towards the assembly of the XENON1T experiment. The water tank, constructed from the top, was at that time only few meters high. The inner part of the roof was then easy to reach and allowed us to attach the reflective foil in few days. It was a very delicate job. Examination of the foil reflectivity: Where the protective layer has been removed, it just looks like a mirror…

In the following months the construction of other parts of XENON1T developed very fast (see previous blog entries) and after one year of intermittent work, this October 2014 the Muon Veto group travelled to the water tank and meet all together. We continued carefully attaching the reflective foil, cladding the complete, huge water tank from the inside.

The next important step was to mount the PMTs to the roof and wall of the water tank. In order to allow the path from the farthest PMTs to the electronic room outside the tank, one had to deal with 30m of high voltage and signal cables for each PMT. Mounting the PMT was the most sensitive step, because these detectors are very delicate and any mistake could result in permanent damage. For this reason, we used appropriate white Mickey Mouse gloves and a lot of caution. The high accuracy of these detectors can be well understood by considering that a PMT can perfectly distinguish a single photon, while the threshold for the human eyes is around hundred photons. PMTs mounted on the roof of the water tank, and still covered with their mechanical protections.

Later on, the two independent PMT calibration systems were mounted. They allow us to obtain, when necessary, a response of the PMTs even when the water tank is closed. The first calibration system consists in a set of optical fibers with one end connected to a PMT and the other end to a blue LED pulser, outside the water tank. The optical fibers are able to transmit all the incoming light via total internal reflection. In fact, when you illuminate one side, light travels through the 30m of fiber and gets out entirely from the other side, looking like some peculiar Christmas lights. The second calibration system is made of four diffuser balls submerged in the water, which can illuminate all the 84 PMTs simultaneously. Thanks to a wise choice of materials, this handmade system is capable of transmitting light homogeneously in all directions. For calibration purposes, it is useful that all PMTs receive the same amount of light. The diffuser ball looks like a very uniform blue bulb when it is turned on in a dark room. PMT and relative optical fiber mounted on the wall of the water tank. Most of the reflective foil still has a protective layer on.

After one month of hard work now, in November 2014, we completed the main part of the Muon Veto installation. All this work has been concluded successfully thanks to a strongly motivated team that has seen years of preparation finally getting realized. Top view of the water tank. The XENON1T cryostat is already mounted together with the cryogenic pipe. The reflective foil is still covered in a protective layer.

The XENON1T detector sits in the center of a large water tank. All the signal and high voltage cables for the photosensors in the time projection chamber are guided by a pipe that goes from outside where the computers are located—through the tank to the detector. This stainless steel pipe was produced by ALCA, a company located near Vicenza in Italy.

More than 900 cables, each 10 meter long, had to be inserted into a 10 centimeter diameter pipe. Before the installation the cables were prepared at the University of Zurich. We developed two types of connector made out of PTFE and copper; one for the high voltage cables, one for the signal cables. These connectors satisfy the stringent requirement on radioactive cleanliness. Each holds 24 cables into one bunch. These connectors were mounted on both sides such that they can be easily connected to the detector itself inside the water tank and to other cables, leading to the electronics outside of the water tank. After bunching the cables they had to be cleaned and packed carefully to protect them from pollution during the transportation to ALCA. At ALCA, each bunch was unpacked and one after the other inserted into the pipe for which we fixed each to a steal pulling wire. After all bunches were successfully inserted, both ends of the pipe were closed with caps, because the pipe had to be pumped in order to remove substances like water or alcohol that remained in the cable bunches from the cleaning process. Installation of the signal cables under clean conditions.

The XENON1T detector sits in the center of a large water tank. All the signal and high voltage cables, pipes for liquid and gaseous xenon, vacuum piping and various other lines get there via one large pipe. Installation of the cryogenic pipe inside the XENON1T water tank, July 2014

We have just finished the installation of this pipe. It’s actually a quite fascinating piece of engineering. In it, there are all the signal and high voltage cables for the photomultiplier tubes. There are pipes to recirculate the xenon for purification in the adjacent building, which are themselves inside a vacuum-insulated pipe that in turn runs inside this pipe. The large diameter pipe is also used to evacuate the cryostat, as well as the heat insulation of the cryostat. And it holds a bunch of extra cables and wires for various other sensors. So, it’s really much more than just a pipe. It’s the lifeline to the detector. And it’s pretty cramped: These are the signal wires, bunched together into a single pipe inside the cryogenic pipe. They are PTFE-insulated, low-radioactivity wires with custom-made connectors. Inside the XENON Water Tank, May 2014

After seven days of hard work the support structure for the XENON1T cryostat has been finished this month. The photo shows this support structure which sits inside the massive water tank. A total of 8.5 tons of steel with an ultra low radioactive background have been used for this construction. The cryostat vessel, weighting itself one tonne not counting the xenon, will hang inside this support structure. This work has been done by technicians and students from Nikhef and LNGS.

The XENON1T is shielded from ambient radioactivity by a large water tank that is equipped as a muon veto. The tank has a diameter of 10 meters and is 10 meters high. It is constructed from top to bottom and went up in the Gran Sasso underground laboratory within less than a month: 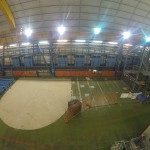 Construction of the XENON1T water tank: The floor in Hall B is prepared with self-leveling concrete. Image: Roberto Corrieri/XENON. 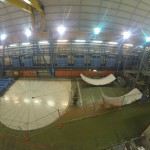 Construction of the XENON1T water tank: The roof of the tank is built first. Image: Roberto Corrieri/XENON. 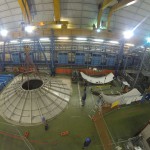 Construction of the XENON1T water tank: The safety rail and stiffeners on top of the water tank are welded in place. Image: Roberto Corrieri/XENON. 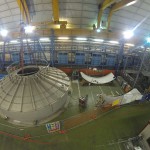 Construction of the XENON1T water tank: The first ring is welded below the roof. Image: Roberto Corrieri/XENON. 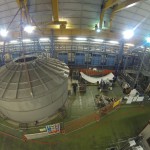 Construction of the XENON1T water tank: As the large crane lifts the roof up, the second ring is welded on. Image: Roberto Corrieri/XENON. 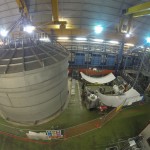 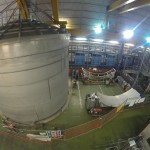 Construction of the XENON1T water tank: Ring 4… Due to its corrosion resistance and its low radioactivity, the whole tank is made from specially selected stainless steel. Image: Roberto Corrieri/XENON. 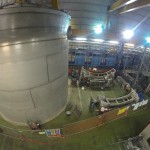 Construction of the XENON1T water tank: The last ring is welded on. Image: Roberto Corrieri/XENON. 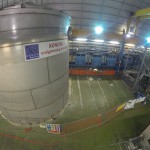 Construction of the XENON1T water tank: After welding the shell to the floor, the water tank is completed. Image: Roberto Corrieri/XENON.

All the xenon must somehow get to and from the detector through the water tank, as must signal and high voltage cables, various sensors, and we need large pipes to get a really good vacuum for cleaning the detector prior to filling. We use one large pipe for this lifeline of the detector, an aorta of sorts. Here is spokesperson Elena Aprile illustrating the huge scale of the XENON experiment. Spokesperson Elena Aprile behind the opening in the water tank through which all connections to the detector will be made. Picture credit: The XENON Collaboration.